Skip Tanaka – Kneeling before the Lord

“The first time I heard it was at the Be One Osaka Church in February 2018. Worship leader Jumpei Saeki recorded the song on my phone. I immediately liked the song: the beautiful musical structure and the simplicity of the lyrics: kneeling before the Living God and giving Him praise forevermore. I do not speak Japanese: the ease of pronunciation and phrasing made it easy to learn! It has become my favorite Japanese praise song.”

Born and raised in Chicago, IL, Skip Tanaka is a third-generation Japanese American.

Skip didn’t grow up in the church and considered himself an atheist in high school, but all of that changed when a friend invited him to attend her worship service at her church. “I didn’t enjoy or understand most of the service, but I returned anyway!” he joked. Six months later, he became a Christian and has been following the Lord ever since. “It’s a miracle that I became a follower of Jesus!”

Skip moved to Knoxville, Tennessee in 1975 where he ran his own business as a insurance broker and later sold in 2014. Skip lives with his wife of 45 years. They have two children and three grandchildren, one of whom (Parker) appears in the music video.

Now in semi-retirement, Skip is able to devote more time to his family and his passion for making a difference in the church using music.

Skip visited Japan for the first time in 2015. He went as a tourist but ended up speaking and playing at the Kansai Christian School (KCS) in Ikoma and at a local church. There was a special bond created with the KCS students, and they became a catalyst for return visits.

Since then, he’s been returning to Osaka annually and expanded his involvement.

“I go to Japan to encourage Japanese Christians. In 2018, I started doing music for several Japanese churches and gatherings in the US. I want to apply my Osaka experience, in the US.”

Kneeling before the Lord
I lift up praises from my heart

For all eternity, you are
My God 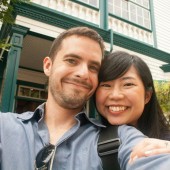